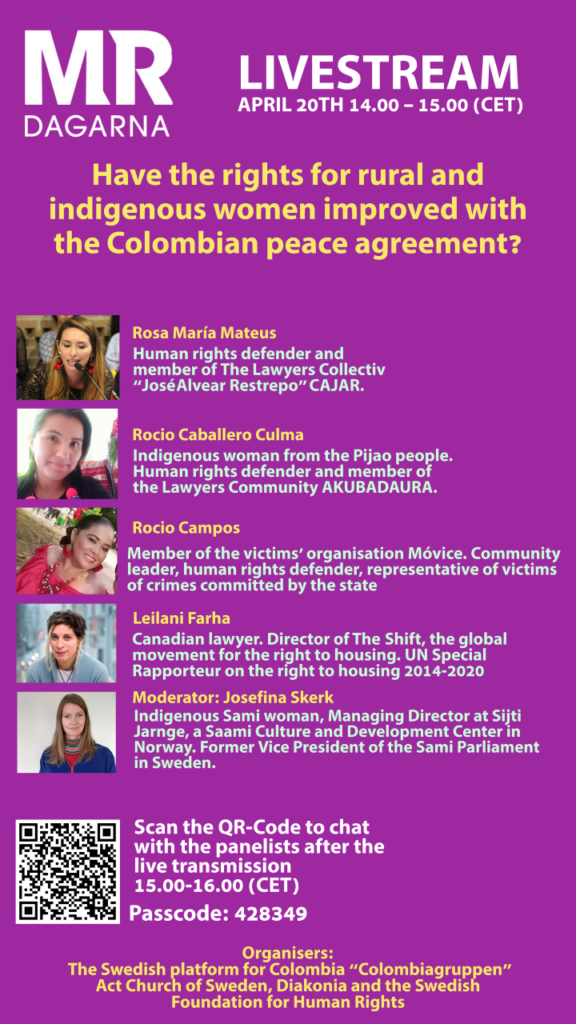 There are several causes behind the internal displacement in Colombia, the most important being the concentration of land and the struggle for control of productive

lands. Nearly eight million people have been forced to abandon their territories as a result of the serious human rights violations to which they have been exposed. It is estimated that out of the affected population, 50% are women and 18% belong to ethnic minorities. The situation of displacement and the few possibilities of returning to their lands increase the vulnerability of those affected.

The right to territory constitutes the basis for access to food, housing and development for indigenous and rural communities.

In other peace processes around the world, women and indigenous communities have often been overlooked as beneficiaries of land reforms and as owners of agricultural land. This has had far-reaching negative consequences for the socio-economic status and independence of women and indigenous peoples. Colombia has the opportunity to do things differently.

How interpret the interrelation of the right to housing and the right to territory? How is the right to housing and agricultural land guaranteed in Colombia within the framework of the implementation of the peace accords? What is the balance after four years of implementation of point one – integral land reform – of the agreements? What does the future hold for rural women and the indigenous peoples of Colombia? These are some of the topics that will be addressed during the event.

Please observe that the Swedish Forum for Human Rights in Uppsala will only be a digital event. Register here!

The tickets give you a login to MR-dagarnas digital platform and access to all seminars April 19-21 and a full three months after the forum.

For more information on the event, visit www.mrdagarna.nu/en/