Preventing youth involvement in urban violence: What do the Colombian youths have to say? 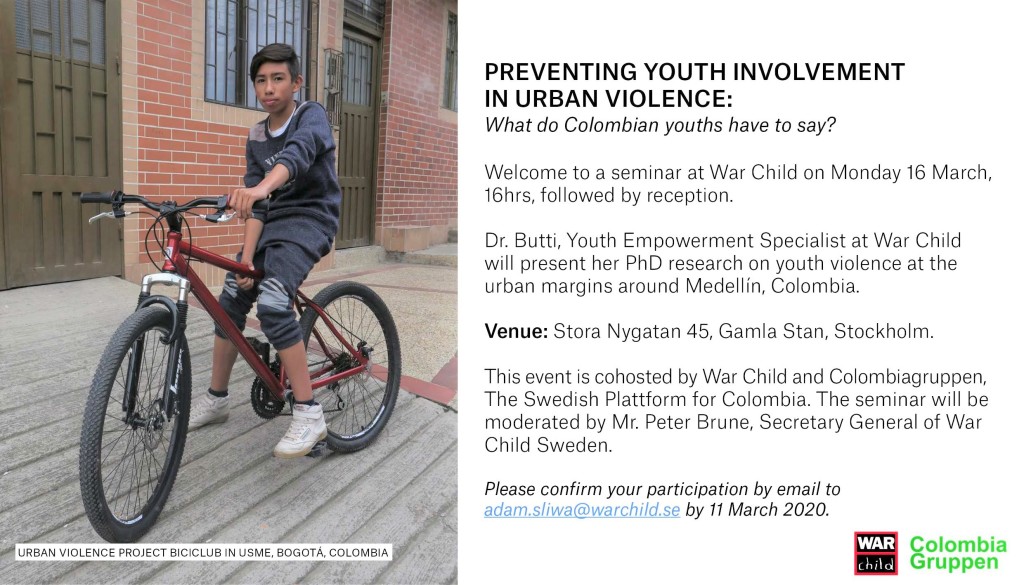 Dr. Elena Butti currently works as Youth Empowerment Specialist at the Amsterdam office of War Child. She holds a doctorate from the University of Oxford, based on her ethnographic research on youth violence at the urban margins around Medellín, Colombia. Dr. Butti will present her research at a seminar at War Child Sweden on Monday 16 March, 16-17 hrs, followed by a reception.

In recent years, the death rates tied to criminal violence in urban contexts have largely outgrown those related to ’traditional’ war. It is ever more urgent for the humanitarian sector to turn its attention to these new contexts of work. Across Latin America, where most of these deaths occur, governments have mainly been dealing with urban violence through tough-on-crime policies, which enjoy a high level of popular support in the current political climate. However, these policies have been proven largely ineffective and even counterproductive.

Those who end up in prison are typically not the criminal chiefs, but rather the young people at the lowest echelons of the criminal ladder. In the lack of alternative opportunities and visions, these youths typically continue their criminal involvement when they get out. But if shutting youths in prison is not the way, what should be done?

The answer lies within young people themselves. This research is based on two years of close engagement with adolescents and youths involved in drug-dealing around Medellin, Colombia. A major finding is that – at least during this initial phase – these young people are much less sure of what they are doing than we may assume. Preventive approaches that seek to productively tap into this self-questioning, (re-)opening windows of opportunity that were previously close to these youths, constitutes a more effective way of dealing with urban violence than repression.

Please confirm your participation by email to adam.sliwa@warchild.se by 11 March 2020.

This even is cohosted by War Child and The Swedish Plattform for Colombia, Colombiagruppen.